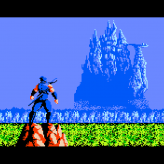 Step into the shoes of the skillful ninja Ryu Hayabusa and go on a quest to avenge your father in this action platformer game – Ninja Gaiden! Take the Dragon Sword and fight your way against dozens of enemies in this very challenging classic game.

Ninja Gaiden is a 1988 action platformer game for the Nintendo Entertainment System (NES). Known for its challenging gameplay, in this game you will play as Ryu Hayabusa. After the death of your father, a note was found telling Ryu to take the Dragon Sword and meet an archaeologist named Walter Smith who lives in America. The story takes off from there as you seek to avenge your father. This game is notable for being extremely challenging and requires cunning reflex, skill, and determination. Are you up for the challenge?

Play Ninja Gaiden game online in your browser free of charge on Arcade Spot. Ninja Gaiden is a high quality game that works in all major modern web browsers. This online game is part of the Arcade, Action, Emulator, and NES gaming categories. Ninja Gaiden has 3 likes from 3 user ratings. If you enjoy this game then also play games Pokemon Greninja-Z and LEGO Ninjago The Final Battle. Arcade Spot brings you the best games without downloading and a fun gaming experience on your computers, mobile phones, and tablets. New arcade games and the most popular free online games are added every day to the site.