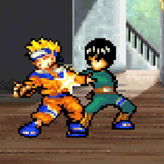 Be a part on the Ninja history and take on Orochimaru in this wonderful action game based on the popular anime title – Naruto: Ninja Council 2! Witness the story unfold by watching the cut scenes of the characters! Use your character’s special ninjutsu abilities to win the fight.

Naruto: Ninja Council 2 is a 2D platformer action game based on the acclaimed anime series Naruto. Also called as Naruto: Great Council of the Strongest Ninja 2, this action platformer game features varying settings based on the anime. The game itself takes place somewhere on the episodes 20 to 80 on the original anime series and features new missions, and a lot of cut scenes. The original Game Boy Advance (GBA) game also features multiplayer modes in which player can fight each other, or fight together in Co-op.

There have been 12 likes from 16 votes on this game.