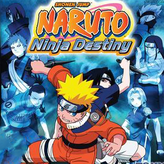 Punch, kick and dodge your way into this 3D Nintendo game. Naruto: Ninja Destiny picks up in the Chunin Arc of the popular anime series. In this game, Naruto now started training under Jiraiya to refine his skills as a chunnin, while Sasuke went under the tutelage of Kakashi.

Start things off between Naruto Versus Neiji in a one on one match. Defeat this prodigy of the Hyuga clan and be one step closer to your dreams of being a Hokage! If you like fighting games and anime, this game is right up your alley. Each fight contains 2 rounds as you control 1 of the ninjas in Naruto’s list of unforgettable characters. Break your opponent’s combo by using projectiles such as Kunai and Shurikens. In the thick of the battle, you can also use life power-ups to turn the fight in your favor. The game features Smooth textures, engaging background music, and sound effects that will have your chakra pumping. Fight with 16 different playable characters in Village of Hidden Leaves and follow one of the thrilling chapters in the Naruto Saga. Matches are followed by crawling texts and character quotes, so you do not have to miss a second of the story. Save your progress and continue where you left off. Fulfill your destiny as Konoha’s number one ninja in Naruto: Ninja Destiny!