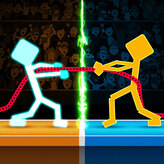 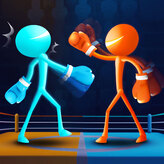 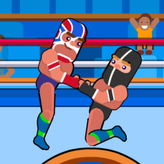 Wrestle your way to victory in this funny ragdoll wrestling game. Knock down your opponent to the ground with only one button in Drunken Wrestle! Fight against an AI opponent or Invite your friend over and have a wacky and friendly match inside the ring.

Drunken Wrestle is a wacky physics-based multiplayer game where you play as a drunk trying to wrestle with another drunk. The game features a straightforward control layout: W for Player 2 (the red wrestler) and Arrow Key Up for Player 1 (the blue wrestler). Pressing the respective button will extend the wrestler's feet and give a slight upward force. Your goal is to make the other player's avatar fall and hit his head to the ground while preventing the same thing from happening to yours. Winning a match will give you one star. The first player to get five stars win the game. In every match, the scenery and setting will change at random. Study every setting and use it to your advantage. Try to tilt your character forward so you can overpower your opponent quickly. Practice against an enemy AI, then win over your friends.

You can play this game on both PC and mobile phones.

Play Drunken Wrestle game online in your browser free of charge on Arcade Spot. Drunken Wrestle is a high quality game that works in all major modern web browsers. This online game is part of the Multiplayer, Sports, Mobile, and Ragdoll gaming categories. Drunken Wrestle has 3 likes from 4 user ratings. If you enjoy this game then also play games Drunken Boxing and Drunken Wrestlers. Arcade Spot brings you the best games without downloading and a fun gaming experience on your computers, mobile phones, and tablets. New arcade games and the most popular free online games are added every day to the site.