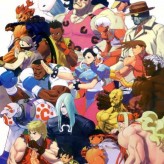 Fight against the imbalance and seek for glory, hope, or vengeance in this 2D fighting game for the CPS3 system – Street Fighter III 3rd Strike: Fight for the Future!

Street Fighter III 3rd Strike: Fight for the Future is a 2D fighting video game that was first released back in 1999 for the Capcom cabinet arcade system. The game directly follows the events of Street Fighter III: 2nd Impact and features the same gameplay and mechanic but adds five additional characters, as well as adding some few enhancements and improvements to the game. As the final installment of the series, this game features the characters Chun-Li, Makoto, Q, Remy, and Twelve added to the original roster of fighters. Each added character has their own storyline that interacts with other characters of the game.