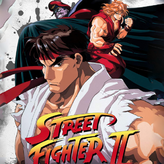 Fight against the evil M. Bison in this cool classic fighting video game! Choose one of the eight characters and polish your fighting skills in Street Fighter 2!

Street Fighter 2 is a competitive 2D fighting video game that was released on multiple gaming and cabinet arcade system including the Sega Genesis gaming console. Street Fighter 2 is the base game of the many updated versions of the game. The game features similar gameplay to the other versions of the game where two fighters fight against each other until one reaches zero health. The game features eight main characters, each with their own reasons to fight, way of fighting, and martial arts skills. Will you be able to finish the game using each of the characters? Good luck and have fun!

There have been 23 likes from 28 votes on this game.

Play Street Fighter 2 game online in your browser free of charge on Arcade Spot. Street Fighter 2 is a high quality game that works in all major modern web browsers. This online game is part of the Arcade, Action, Emulator, and SEGA Master System gaming categories. Street Fighter 2 has 23 likes from 28 user ratings. If you enjoy this game then also play games Street Fighter 5 and Street Fighter 2 Turbo: Hyper Fighting. Arcade Spot brings you the best games without downloading and a fun gaming experience on your computers, mobile phones, and tablets. New arcade games and the most popular free online games are added every day to the site.