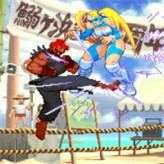 Fight as your favorite Street Fighter character and defeat the evil boss M. Bison the dictator, as well as the devil Akuma, in Street Fighter Alpha 3! Master the three different special styles like A-ism, Z-ism, and turbo mode and see what style best fit your playstyle. Will you be able to clear the story of all characters? Good luck and have fun!