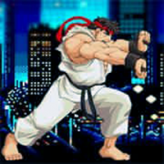 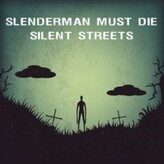 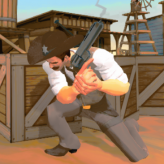 Kick and Punch, the usual combination for arcade beat-em-ups. Streets of Rage 2 RYU will have you playing as the titular character of the Street Fighter games.

Go the streets of New York with your Gi and red headband. Hadouken yourself with a melee of bad guys, side-scrolling arcade action style. Fireball not enough to keep the bad guys at bay? Now you can pick up more items to put more kick in Ryu’s arsenal. Knives and bottles are on the menu, and it’s up to you to serve a platter of whoop-ass. Eight locations are still available for that tall serving that you can give, beat normal bad guys with a combo of moves that puts them out of commission. After a crime syndicate takes over the city, it is up to you, equipped with nothing but your moves, to finish them off. Fight off the street, a broken downtown, the beach, a dance bar, or a ship. Get to the final stage and defeat the leader, Mr. X. He is no pushover and will take most of the moves you learned to take him down. Ready your kicks and punches to finish all of them off. Get items to replenish your health to avoid starting over. Start and practice those moves. Remember that in Streets of Rage 2 RYU: to live is to fight, and to fight is to live!