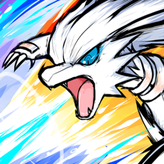 The legendary Pokemon Reshiram is in great peril, and so is the world! Save your people and Reshiram in this awesome Pokemon ROM hack – Pokemon Eternal Snow! Capture and fight against a total of 650 Pokemons as you embark on a new and fun quest!

Pokemon Eternal Snow is a 2016 Pokemon ROM hack based on Pokemon Emerald Version. In this game, Reshiram is the embodiment of snow and winter. One day, a dark and powerful force attacked Reshiram and Reshiram lost most of its power and tried to cover itself in a mountain of snow, covering the entire region with snow. The game features 650 total Pokemons, more than 100 new moves and custom animations, 3 different sides of the story, and much more. Have fun and enjoy your snow-filled quest.

Play Pokemon Eternal Snow game online in your browser free of charge on Arcade Spot. Pokemon Eternal Snow is a high quality game that works in all major modern web browsers. This online game is part of the Adventure, Strategy, GBA, and Pokemon gaming categories. Pokemon Eternal Snow has 3 likes from 3 user ratings. If you enjoy this game then also play games Pokemon Fire Red Version and Pokemon Emerald Version. Arcade Spot brings you the best games without downloading and a fun gaming experience on your computers, mobile phones, and tablets. New arcade games and the most popular free online games are added every day to the site.