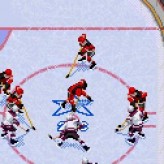 Hit the ice, learn to skate, and play hockey against the best players in the world! Become a champion and have no rival in NHL 2002! Collect cards that affect your player’s skill and get ready for some ice cold competition.

NHL 2002 is an ice hockey sports video game that features Don Taylor’s unique commentary and the NHL Cards mode. Cards can be collected that will boost the stats of your players when used. The game features competitive AI and follows the rules of real life ice hockey. Rush the net in pursuit of the goal and guard the crease to shut out the opponent team in NHL 2002! Have fun!

Play NHL 2002 game online in your browser free of charge on Arcade Spot. NHL 2002 is a high quality game that works in all major modern web browsers. This online game is part of the Sports, Skill, Emulator, and GBA gaming categories. NHL 2002 has 9 likes from 9 user ratings. If you enjoy this game then also play games NHL 99 and NHL 98. Arcade Spot brings you the best games without downloading and a fun gaming experience on your computers, mobile phones, and tablets. New arcade games and the most popular free online games are added every day to the site.