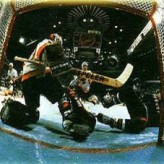 Play 84 relentless games of ice hockey in this old-school sports game. Select a team and go on a competitive face-off in NHL 95! Do your best to get the Stanley Cup and have your names engrave on it!

NHL 95 (also known as NHL Hockey 95, or NHL ’95) is a classic ice hockey video game released by Electronic arts for multiple gaming consoles including the Super Nintendo Entertainment System (SNES). Released back in 1994, the game features a whole season of slap shots, board checks, mid-season trades, and hot rookies. The game is one of the best during the time (especially in terms of gameplay), but the enemy AI is really simple and easy to defeat, giving it a low rating and review as compared to earlier titles. The game is still fun to play regardless.

Play NHL 95 game online in your browser free of charge on Arcade Spot. NHL 95 is a high quality game that works in all major modern web browsers. This online game is part of the Arcade, Sports, Emulator, and SNES gaming categories. NHL 95 has 8 likes from 9 user ratings. If you enjoy this game then also play games NHL 2002 and NHL 99. Arcade Spot brings you the best games without downloading and a fun gaming experience on your computers, mobile phones, and tablets. New arcade games and the most popular free online games are added every day to the site.