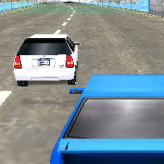 Super Drift 3D 2, a mouthful but it is what it is, a 3D racing game that is a sequel to the one of the most popular Flash-based browser games. This game is the sequel to one of the most impressive games that ever came out on the platform. What this game meant for future racing games to come was huge. It introduced graphics that had not been introduced to the platform ever before! Full 3D with animated environments was unheard of during the time when this game was first released.

Now the sequel offers more tracks, more varied environments and even more action! Put the pedal to the metal and floor your opponents! Super Drift 3D 2 rolls down the tongue beautifully, so good, so smooth, just like the game! Now prepare to race, let your opponents’ eat the dust. Let the dust tear them up from defeat!

Play Super Drift 3D 2 game online in your browser free of charge on Arcade Spot. Super Drift 3D 2 is a high quality game that works in all major modern web browsers. This online game is part of the Racing, Arcade, Sports, and Driving gaming categories. Super Drift 3D 2 has 2 likes from 2 user ratings. If you enjoy this game then also play games Super Mario Bros. and Super Mario 64. Arcade Spot brings you the best games without downloading and a fun gaming experience on your computers, mobile phones, and tablets. New arcade games and the most popular free online games are added every day to the site.