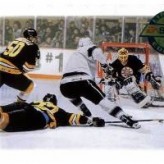 Play hockey in 16bit graphics in this 1994 entry of EA’s ice hockey series! Complete the tournament and win glory for your team in NHL ’94! Play with the new blistering slap shots and make your offense faster and even more challenging. Have fun!

NHL ’94 is a 1993 ice hockey video game released for the Super Nintendo Entertainment System (SNES). The game boasts its 25+ new features from the previous entries. The game has over 70 new pieces of organ music that will be played on various matches from arenas around the league. The game also features a couple of new game modes including penalty shots and shootout modes. NHL ’94 is claimed to be the best of the NHL series and one of the best hockey games ever made.

There have been 14 likes from 15 votes on this game.

Play NHL '94 game online in your browser free of charge on Arcade Spot. NHL '94 is a high quality game that works in all major modern web browsers. This online game is part of the Arcade, Sports, Emulator, and SNES gaming categories. NHL '94 has 14 likes from 15 user ratings. If you enjoy this game then also play games NHL 2002 and NHL 99. Arcade Spot brings you the best games without downloading and a fun gaming experience on your computers, mobile phones, and tablets. New arcade games and the most popular free online games are added every day to the site.