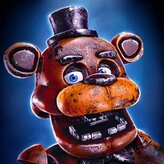 Ever wondered who’s the deadliest Five Nights at Freddy’s character? Then choose your favorite animatronics and head on to FNAF Battle! Go toe to toe with the other FNAF animatronics and prove to the world that you reign supreme!

FNAF Battle is a fan made fighting arena game based on the popular indie game franchise Five Nights at Freddy’s (or FNAF). Choose a character from the five original animatronics from the first FNAF game. These animatronics are: Freddy Fazbear, Bonnie, Chica, Foxy, and the mysterious Golden Freddy. Each character wields their iconic weapons such microphone and bass guitar. This game’s fighting mechanic is quite simple. Every time you successfully block an opponent’s attack he/she will be electrocuted for a short moment – giving you time to deliver a free punch to the face. Have fun.

Play FNAF Battle game online in your browser free of charge on Arcade Spot. FNAF Battle is a high quality game that works in all major modern web browsers. This online game is part of the Arcade, Action, and Fighting gaming categories. FNAF Battle has 10 likes from 12 user ratings. If you enjoy this game then also play games FNAF Overnight 2: Reboot and FNaF World. Arcade Spot brings you the best games without downloading and a fun gaming experience on your computers, mobile phones, and tablets. New arcade games and the most popular free online games are added every day to the site.