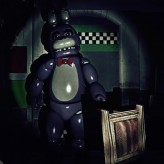 Stop sitting around like a scared duck and try to run away from the deadly animatronics in this impressive fan-made game – FNAF Overnight 2: Reboot! Roam around the map, hide and run in this cool fan-made game created and developed by CBGames.

FNAF Overnight 2: Reboot is a fan made survival horror game based on the popular indie title Five Nights at Freddy’s. The game follows the premise and plot of the original game but removes the limit of having only to sit at the table. Instead, with this game, you can roam around Freddy’s restaurant and avoid the murderous animatronics.

Controls are explained in the game

Instructions
– Download the file Overnight-2-Reboot-Night-3-Demo.zip
– Extract the file to an Empty Folder
– Locate and Open Overnight 2 Reboot.exe
– Have fun