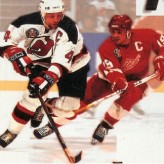 Put your eyes on the puck and ready yourself for some intense ice hockey competition! Fight in fast-paced matches in NHL 96! The game isn’t called NICE-hockey for a reason, and you will clearly see why!

NHL 96 is an ice-hockey video game released back in 1995 for the Super Nintendo Entertainment System (SNES). The game features direct improvements from the previous title and includes new game mechanics such as double minor penalties. Player fighting was also included in this game and became a major feature with three new animations for a “fight ending”. Put the enemy player on the ice floor as he squirms in pain, and remove the enemy’s best player to secure your victory! Use a variety of underhanded strategies if you really want, or prevent the enemy team from doing the same strategies against you.

Play NHL 96 game online in your browser free of charge on Arcade Spot. NHL 96 is a high quality game that works in all major modern web browsers. This online game is part of the Arcade, Sports, Emulator, and SNES gaming categories. NHL 96 has 1 likes from 1 user ratings. If you enjoy this game then also play games NHL 2002 and NHL 99. Arcade Spot brings you the best games without downloading and a fun gaming experience on your computers, mobile phones, and tablets. New arcade games and the most popular free online games are added every day to the site.