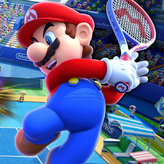 Play a game of Tennis with Mario, Luigi, Princess Peach, Toad, and the rest of the gang from Mushroom kingdom in Mario Tennis for the Game Boy Color (GBC). Take control of either Alex or Nina and go on a journey to become the top tennis player in the Mario universe.

Mario Tennis, also known as Mario Tennis GB, is a retro tennis video game for the Game Boy Color (GBC) handheld gaming console. The game is known to be the second tennis game of the series and features an RPG-like story mode featuring characters that are new to the franchise; Alex, and Nina. Initially released back in 2000, this game features four different game modes: Story Mode which acts as the main role-playing game, Exhibition Mode that acts like a free play where player can have a match against an AI opponent, Linked Play which is similar to exhibition mode but the player will play against another player via the Game Boy's link cable, and Mario Mini Games mode that features a total of four mini-games presented by various Nintendo Characters like Baby Mario, Donkey Kong, and more. Play the Story Mode and lead your character to become the best tennis player. Have fun.

There have been 36 likes from 43 votes on this game.

Play Mario Tennis game online in your browser free of charge on Arcade Spot. Mario Tennis is a high quality game that works in all major modern web browsers. This online game is part of the Arcade, Sports, Mario, and GBC gaming categories. Mario Tennis has 36 likes from 43 user ratings. If you enjoy this game then also play games Super Mario Bros. and Super Mario 64. Arcade Spot brings you the best games without downloading and a fun gaming experience on your computers, mobile phones, and tablets. New arcade games and the most popular free online games are added every day to the site.