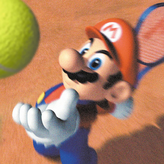 Join Mario and the rest of the jolly gang as they play their favorite outdoor sports. Play with Princess Daisy and Waluigi in Mario Tennis 64! Keep playing to unlock various tennis courts, playing fields, and characters.

Mario Tennis 64 is a tennis sports video game featuring Mario and the rest of the gang. Released back in the year 2000, the game is the sixth Mario game for the Nintendo 64 (N64) gaming system and brings in eleven new characters to the Tennis franchise including the infamous Waluigi, the elusive Shy Guy, Birdo, and the powerful Donkey Kong. Mario Tennis 64 is among the most played sports-themed Mario games for the console. Will you be able to beat all characters in a fair and fun game? Good luck and have fun!

Play Mario Tennis 64 game online in your browser free of charge on Arcade Spot. Mario Tennis 64 is a high quality game that works in all major modern web browsers. This online game is part of the Arcade, Sports, Mario, and N64 gaming categories. Mario Tennis 64 has 3 likes from 4 user ratings. If you enjoy this game then also play games Super Mario Bros. and Super Mario 64. Arcade Spot brings you the best games without downloading and a fun gaming experience on your computers, mobile phones, and tablets. New arcade games and the most popular free online games are added every day to the site.