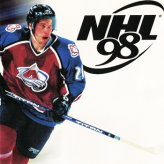 Get some intense ice-hockey action and join Jim Hughson as he returns for the play-by-play with Daryl Reaugh’s commentaries in NHL 98! Play along with the star player Vladimir Konstantinov for the last time!

NHL 98 is an ice hockey Sports video game, developed by Al Baker and Associates and published by EA Sports, back in 1997. The game follows NHL 97 and is the last installment of the NHL series to be released for the Sega and other classic home consoles. As the final classic entry of the series, NHL ’98 features one of the most advanced graphics at the time with 3D game court and players. Gameplay and mechanics are identical to the previous title with improved AI. Good luck and have fun!

Play NHL 98 game online in your browser free of charge on Arcade Spot. NHL 98 is a high quality game that works in all major modern web browsers. This online game is part of the Arcade, Sports, Emulator, and SNES gaming categories. NHL 98 has 17 likes from 18 user ratings. If you enjoy this game then also play games NHL 2002 and NHL 99. Arcade Spot brings you the best games without downloading and a fun gaming experience on your computers, mobile phones, and tablets. New arcade games and the most popular free online games are added every day to the site.