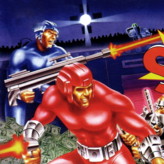 Shoot your way across multiple arenas and overcome various traps and enemies. Pick multiple weapons and try to survive the Super Smash T.V.! Be a contestant of the futuristic and brutal game show to win various prizes.

Super Smash T.V. is a futuristic shoot’em up game released back in 1990 for the Super Nintendo Entertainment System (SNES). In this game, the player will battle waves of enemies by using guns in a top-down view arena shooter style. You play as contestant in one futuristic and brutal game show and your goal is to win the game, and defeat the bosses located at the end of each stage, and get some fame and fortune to your name. This game inspired many other games of the genre.

Play Super Smash T.V. game online in your browser free of charge on Arcade Spot. Super Smash T.V. is a high quality game that works in all major modern web browsers. This online game is part of the Arcade, Shooting, Emulator, and SNES gaming categories. Super Smash T.V. has 1 likes from 1 user ratings. If you enjoy this game then also play games Super Mario Bros. and Super Mario 64. Arcade Spot brings you the best games without downloading and a fun gaming experience on your computers, mobile phones, and tablets. New arcade games and the most popular free online games are added every day to the site.