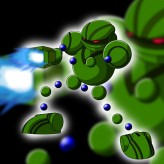 Follow the chronicling exploits of our unlikely robot protagonist in this awesome action platformer game. Shoot all your enemies in Vectorman! Defeat Warhead and save the humans in this retro run and gun game.

Vectorman is a challenging run and gun platformer video game developed for the SEGA genesis console. It was the year 2049 when the human race left the Earth on a migratory voyage. Mankind has left intelligent machines known as orbots to clean the planet’s mess while mankind is away. However, due to an accident, an orbot named Warhead was created and he swore to eliminate all humans in sight. Play as Vectorman and defeat Warhead before the humans suffer! Restore the planet Earth and have fun!

Play Vectorman game online in your browser free of charge on Arcade Spot. Vectorman is a high quality game that works in all major modern web browsers. This online game is part of the Arcade, Shooting, Emulator, and SEGA gaming categories. Vectorman has 3 likes from 4 user ratings. If you enjoy this game then also play games Vectorman 2 and Sonic 3 Complete. Arcade Spot brings you the best games without downloading and a fun gaming experience on your computers, mobile phones, and tablets. New arcade games and the most popular free online games are added every day to the site.