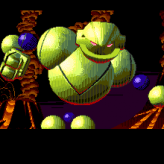 Clear the planet Earth of mutant creepy crawling insects so the humans can return to live again in this old school shooting platformer game – Vectorman 2! Shoot your way through over twenty bug infested levels and destroy the menacing spider queen!

Vectorman 2 is a 1996 action platformer shooter following the game Vectorman. The game contains more levels, more power ups, and more fun than the previous title. The game takes place after the events of the first title when Vectorman defeated warhead and disposed his remains in the sun. After a long journey back to Earth, our robot hero detected a new threat: the mutated insects and their giant spider queen. The game features 20 insect crawling levels, new weapons, and new forms. The game also features secret levels and challenges. Have fun!

Play Vectorman 2 game online in your browser free of charge on Arcade Spot. Vectorman 2 is a high quality game that works in all major modern web browsers. This online game is part of the Arcade, Shooting, Emulator, and SEGA gaming categories. Vectorman 2 has 4 likes from 4 user ratings. If you enjoy this game then also play games Vectorman and Sonic 3 Complete. Arcade Spot brings you the best games without downloading and a fun gaming experience on your computers, mobile phones, and tablets. New arcade games and the most popular free online games are added every day to the site.