Tomb Raider - Curse of the Sword 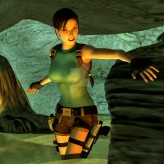 Play as Lara Croft and prevent an ancient evil ritual from taking over your body in this action adventure video game – Tomb Raider – Curse of the Sword. Pursue the cult that started the darkness and save your soul!

Tomb Raider: Curse of the Sword is a 2001 Game Boy Color (GBC) video game based on the Tomb Raider franchise and series. The game is a sequel to the first Tom Raider game for the same system and was followed by another title. In this game, the story started during ancient times when an evil magician Madame Paveau reigned the land. After centuries had passed, the magician’s minions are still searching for the perfect body to give to their master… Unfortunately, the body was Lara Croft’s. Pursue the cult and preventing Paveau from resurrecting.