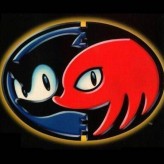 Play as Knuckles and unlock new areas or play the role of Sonic and complete the level as fast as possible in Sonic & Knuckles! Use the new lock-on technology that was introduced in this game and master the new moves and mechanics to fully beat the game! Good luck!

Sonic & Knuckles is a very popular classic platformer video game that was first released back in 1994 for the Sega Mega Drive and Genesis home console. As a sequel to the game Sonic the Hedgehog 3, this game features similar gameplay and game mechanics but introduces a lot of new features including the ability to control Knuckles. Unlike the main hero Sonic the Hedgehog, Knuckles emphasizes strength rather than speed and features his own moves and abilities.

There have been 46 likes from 53 votes on this game.

Play Sonic & Knuckles game online in your browser free of charge on Arcade Spot. Sonic & Knuckles is a high quality game that works in all major modern web browsers. This online game is part of the Arcade, Retro, Emulator, and SEGA gaming categories. Sonic & Knuckles has 46 likes from 53 user ratings. If you enjoy this game then also play games Sonic 3 Complete and Sonic Mania Edition. Arcade Spot brings you the best games without downloading and a fun gaming experience on your computers, mobile phones, and tablets. New arcade games and the most popular free online games are added every day to the site.