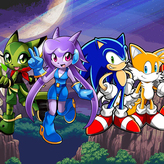 Play as Sash Lilac and run like Sonic in this cool mashup arcade game! Collect fragments and avoid enemies in Sonic X Freedom Planet! Try to bring the balance back as two worlds collide mysteriously in this cool fan made game!

Play Sonic X Freedom Planet game online in your browser free of charge on Arcade Spot. Sonic X Freedom Planet is a high quality game that works in all major modern web browsers. This online game is part of the Arcade, Retro, Emulator, and SEGA gaming categories. Sonic X Freedom Planet has 1 likes from 1 user ratings. If you enjoy this game then also play games Sonic 3 Complete and Sonic Mania Edition. Arcade Spot brings you the best games without downloading and a fun gaming experience on your computers, mobile phones, and tablets. New arcade games and the most popular free online games are added every day to the site.