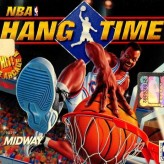 Step inside the basketball courts and shoot the ball into the ring in this awesome old-school sports video game – NBA Hang Time! Create your character, perform alley-oops and score with a double dunk!

NBA Hang Time is a spiritual sequel to NBA Jam Tournament Edition. Developed and published by Midway and was released back in 1996 for various gaming consoles including the Super Nintendo Entertainment System (SNES). The game was extremely similar (almost identical) to NBA Jame games with some new additions, including the new “Create Player” feature that allows the player to create his/ her own basketball player while giving control to the character’s height, weight, and power among other skills. Improve your character’s stats by winning games and using the additional attribute points. Have fun!

Play NBA Hang Time game online in your browser free of charge on Arcade Spot. NBA Hang Time is a high quality game that works in all major modern web browsers. This online game is part of the Arcade, Sports, Emulator, and SNES gaming categories. NBA Hang Time has 10 likes from 12 user ratings. If you enjoy this game then also play games NBA Jam and Pokemon Pinball - Ruby & Sapphire. Arcade Spot brings you the best games without downloading and a fun gaming experience on your computers, mobile phones, and tablets. New arcade games and the most popular free online games are added every day to the site.