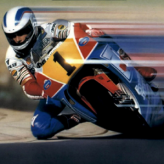 Play with dozens of racers and try to reach the end of the line before the timer reaches zero in this classic motorcycle racing game – Super Hang-On! Prove that you are better than your rival in the career mode and have fun!

Super Hang-On is a motorcycle racing arcade game created for the SEGA drive back in 1989. The game is actually a sequel to the much praised game “Hang-On”. The game is pretty simple as your goal is to race against the clock and try to reach the end of the line before the timer reaches 0. However, unlike other games, your placement matters little due to the amount of racers taking part in the race alongside you. The arcade version of this game has a full-cabinet simulation that was really fun back in the days.

Play Super Hang-On game online in your browser free of charge on Arcade Spot. Super Hang-On is a high quality game that works in all major modern web browsers. This online game is part of the Racing, Arcade, Emulator, and SEGA gaming categories. Super Hang-On has 2 likes from 2 user ratings. If you enjoy this game then also play games Super Mario Bros. and Super Mario 64. Arcade Spot brings you the best games without downloading and a fun gaming experience on your computers, mobile phones, and tablets. New arcade games and the most popular free online games are added every day to the site.