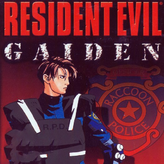 Play the role of two of the most popular characters in the Resident Evil universe: Barry Burton and Leon Kennedy in this awesome horror game – Resident Evil Gaiden! Stop a zombie outbreak on a passenger ship and rescue any survivors in this retro role playing game.

Resident Evil: Gaiden (also known as Biohazard Gaiden) is a survival horror RPG game and is a non-canonical entry to the Resident Evil game franchise. Published back in 2001 for the Game Boy Color (GBC), the game follows Barry Burton and Leon S. Kennedy as they hunt for a new B.O.W. on the ocean liner called Starlight. The game features a top-down perspective with battles and shooting fought in first person view. Will you be able to rescue all survivors and stop the ship from spreading more infections?