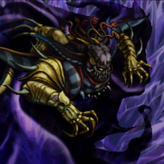 Relive the original first two chapters of the popular Final Fantasy Series with all new story elements and improved gameplay in Final Fantasy I & II – Dawn of Souls! Fight against the Emperor of Palamencia and explore new dungeons and meet new characters.

Final Fantasy I & II – Dawn of Souls is a port and remake of the original Final Fantasy I and II games. Dawn of Souls, however, features a lot of improvement while still staying true to the original base game. The game features new story elements, gameplay, characters, locations, and the ability to save anywhere. Control a group of heroes and save the kingdom from turmoil. Swap characters in your party and develop a winning strategy. Hit the weaknesses of your enemies and win every fight in this wonderful RPG game.