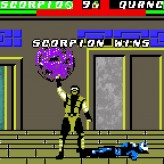 Choose a character, take out your special weapon and brutally execute your opponent in this awesome violent fighting game – Mortal Kombat 4! Stop Shinnok and the forces of darkness from conquering all the realms!

Mortal Kombat 4 (also known as MK4) is the fourth installment of the brutal fighting game franchise. Released back in 1997 for the Game Boy Color (GBC), Mortal Kombat 4 was the first title of the series to have the sprites moved to 3D. In this game, the new weapon based combat was introduced. This game’s story revolves around the attack from the corrupted Elder God Shinnok against his former comrades.

Play Mortal Kombat 4 game online in your browser free of charge on Arcade Spot. Mortal Kombat 4 is a high quality game that works in all major modern web browsers. This online game is part of the Arcade, Action, Emulator, and GBC gaming categories. If you enjoy this game then also play games Ultimate Mortal Kombat Trilogy and Mortal Kombat. Arcade Spot brings you the best games without downloading and a fun gaming experience on your computers, mobile phones, and tablets. New arcade games and the most popular free online games are added every day to the site.