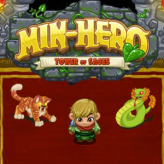 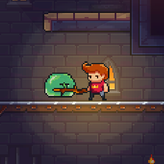 It is the duty of the strong to protect the weak. Gotham City is overrun by savages and criminals. Do your duty as the caped crusader in Bat Hero: Immortal Legend Crime Fighter. Do you have what it takes to rid the city of crime?

Bat Hero: Immortal Legend Crime Fighter is a side-scrolling, beat'em up action game similar to arcade classics like Final Fight and X-Men. This game features 14 levels, and each level features multiple enemies that you must defeat to proceed to the next level. At the final level, you will meet a strong boss enemy at the end, and beating him will complete the game.

In this game, you play the role of BatHero, who looks exactly like Batman. Bat Hero has four kinds of attacks: Light Punch, Heavy Punch, Light Kick, and Heavy Kick. The heavy attacks will knock the enemies away from the player and deal more damage. On the other hand, light attacks deal less damage, but you can connect them with other light attacks to perform consecutive combos.

Alternating between light attacks will deal significantly more damage per second. There are also other forms of attacks like aerial attacks and knockdown attacks that can deal extra damage to enemies. Mastering the longest combo is the key to completing the game quickly. Will you be able to complete all 14 levels?