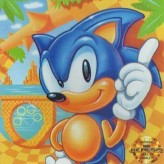 Play one of the most influential game in the history of gaming! Collect golden rings and defeat Dr. Robotnik as Sonic The Hedgehog! Will you be able to set a new record and collect all of the golden rings and discover all the hidden paths and secrets? Good luck and have fun!

Sonic The Hedgehog, also known as Sonic 1, is a fast-paced 2D side-scrolling platformer video game that was initially released in 1991 for various gaming platformers. The game is mostly known on the Sega Genesis console and has spawned countless fan-made hacks, and spinoffs. In this game, you will take control of a skillful hedgehog named Sonic as he tries to stop the evil Dr. Robotnik from stealing the six Chaos Emeralds and harness their powers and conquering the world.

Play Sonic The Hedgehog game online in your browser free of charge on Arcade Spot. Sonic The Hedgehog is a high quality game that works in all major modern web browsers. This online game is part of the Arcade, Retro, Emulator, and SEGA gaming categories. Sonic The Hedgehog has 11 likes from 12 user ratings. If you enjoy this game then also play games Sonic 3 Complete and Sonic Mania Edition. Arcade Spot brings you the best games without downloading and a fun gaming experience on your computers, mobile phones, and tablets. New arcade games and the most popular free online games are added every day to the site.