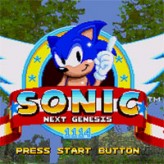 Go on a cool running and fighting adventure as you play as Sonic or his friends in this amazing Sonic the Hedgehog hack – Sonic Next Genesis! Fight the game boss and defeat the game!

Sonic Next Genesis is a fan-made hack of Sonic the Hedgehog that aims to improve the game by adding lots of new stuff and features. In this game, you can play as one of the three available characters. Each character starts at a different level, and the player has an ability to have a partner character that follows around. This hack features 4 levels, a boss fight at the end, and more. The available locations include Wave Ocean, Aquatic Base, Kingdom Valley, and Crisis City. Good luck and have fun!

Play Sonic Next Genesis game online in your browser free of charge on Arcade Spot. Sonic Next Genesis is a high quality game that works in all major modern web browsers. This online game is part of the Arcade, Action, Emulator, and SEGA gaming categories. Sonic Next Genesis has 1 likes from 1 user ratings. If you enjoy this game then also play games Sonic 3 Complete and Sonic Mania Edition. Arcade Spot brings you the best games without downloading and a fun gaming experience on your computers, mobile phones, and tablets. New arcade games and the most popular free online games are added every day to the site.