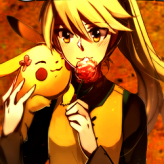 Play the last chapter of the popular Pokemon Adventure game. Play as Yellow and follow the events of the manga in Pokemon Adventure Yellow Chapter! Try to battle in a unique way that no one gets hurt in this awesome Pokemon hack.

Pokemon Adventure Yellow Chapter is a Pokemon hack and the last one of the Pokemon Adventure series. Created by username c067912881 with the help of the PokeCommunity, this game follows the story and events of the Pokemon manga of the same name. In this game, you will play as a very caring lady named Yellow. Yellow doesn’t want anyone to get hurt be it her’s or the opponent’s Pokemon. Thus she developed a fighting style that allows trainers to battle with their Pokemons without anyone getting hurt. The game features many childish conversation, Pikachu in a surfboard, and so much more. Have fun!

There have been 46 likes from 52 votes on this game.