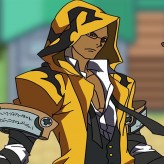 Get on a new Pokemon adventure and learn some awesome moves from the walking Mudkips! Explore the world with your scarf Pikachu and have fun in Pokemon Blazed Glazed! Play a more balanced match, while still maintaining a challenging journey.

Pokemon Blazed Glazed is a unique Pokemon hack as it is a rom hack of another rom hack that was based on Pokemon Emerald Version. The game itself is based on the original hack Pokemon Glazed and features a lot of improvements and new features. Some of the added features and changes are: Altered maps, re-balanced Pokemons, Hidden Power attack base change, new Eevee evolutions, Generation IV, V, and VI Pokemon moves made available, and so much more.

Play Pokemon Blazed Glazed game online in your browser free of charge on Arcade Spot. Pokemon Blazed Glazed is a high quality game that works in all major modern web browsers. This online game is part of the Adventure, Strategy, GBA, and Pokemon gaming categories. Pokemon Blazed Glazed has 14 likes from 18 user ratings. If you enjoy this game then also play games Pokemon Fire Red Version and Pokemon Emerald Version. Arcade Spot brings you the best games without downloading and a fun gaming experience on your computers, mobile phones, and tablets. New arcade games and the most popular free online games are added every day to the site.