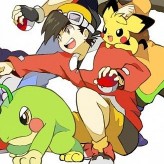 After the adventures of Red and Blue in the first saga, comes another trainer named Gold! Embark on a Generation II quest in Pokemon Adventure Gold Chapter! Throw that ugly bike away and go skateboarding in this another chapter of Pokemon Adventure.

Pokemon Adventure Gold Chapter is another Pokemon hack based on the Pokemon adventures manga. This time, the game will introduce you the second generation Pokemons along with the new character named Gold. In this game, you play as Gold – one of the admirers of Professor Elm. After knowing that professor Elm has gone missing along with his cute Totodile pokemons, you decide to take matters to your hands. The game features day and night cycle, Pokemon fire red base game, storyline based on the manga of the same name, additional events, fairy type Pokemons, and Skateboarding! Have fun!