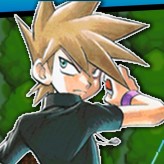 After years of severe training, Blue finally returned to Pallet town to follow the footsteps of his grandpa! Follow his adventures in Pokemon Adventure Blue Chapter! Play Pokemon Fire Red with new game content, map, textures, items, and even references to the anime!