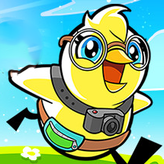 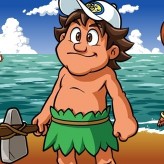 Venture to the mysterious adventure island as a young man named Master Higgins. Explore the land and avoid monsters and even rocks in Hudson’s Adventure Island! Try to find and rescue Princess Leilani in the island!

Hudson’s Adventure Island (more commonly known as Adventure Island) is a classic 1986 platformer game that spawned several sequels. The game was later renamed to Adventure Island Classic in 1992 and is an adaptation to the old game Wonder Boy. The game is similar to any old school platformer but has several game mechanics on its own. In this game, your lose a life when you hit an enemy, get hit by an enemy, fall to water or cliff, or get burned by fire. Similarly tripping down or walking over rocks for a long time will deplete your health/ stamina meter that when depleted takes away another life. Have fun.