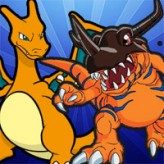 When the world of Pokemon and Digimon crashes with each other, all of humanity will be in grave danger. Restore the balance of the worlds in Pokemon Worlds Collide. Obtain over 380+ Pokemons and Digimons and unleash a combined power like never before!

Pokemon Worlds Collide (also known as Pokemon DarkRising Origins) is a pokemon hack that crosses over the popular franchise Pokemon, with its rival franchise Digimon. In this game, an outbreak has plagued the Region of Ferrum that resulted in a DNA merge between the Digital Monsters known as Digimons with the native Pokemon inhabitants. Defeat the 7 Great Demon Lords, who have been unleashed by the Satan Pokemon, Darugis and restore balance to the world!

Play Pokemon Worlds Collide game online in your browser free of charge on Arcade Spot. Pokemon Worlds Collide is a high quality game that works in all major modern web browsers. This online game is part of the Adventure, Strategy, Anime, and Pokemon gaming categories. Pokemon Worlds Collide has 2 likes from 2 user ratings. If you enjoy this game then also play games Pokemon Fire Red Version and Pokemon Emerald Version. Arcade Spot brings you the best games without downloading and a fun gaming experience on your computers, mobile phones, and tablets. New arcade games and the most popular free online games are added every day to the site.