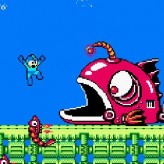 Dr. Willy is out for revenge! Face eight new robots and absorb their abilities in yet another classic arcade game – Mega Man 2! Face against Bubble Man, Quick Man, Air Man, Metal Man, and Flash Man among the others in this old school side scrolling game!

Mega Man 2 is the sequel to the original Mega Man for the Nintendo Entertainment System (NES). Released in 1988, Mega Man 2 allows you to control the super robot once again to battle the evil Dr. Willy. Defeated and humiliated in the first game, Dr. Willy created 8 new super robots to counter Mega Man. Will you be able to stop Dr. Willy and defeat all of his creations? This game is considered by many fans as the best in the series.

Play Mega Man 2 game online in your browser free of charge on Arcade Spot. Mega Man 2 is a high quality game that works in all major modern web browsers. This online game is part of the Arcade, Shooting, Emulator, and NES gaming categories. Mega Man 2 has 10 likes from 10 user ratings. If you enjoy this game then also play games Pokemon Mega and Pokemon Omega Ruby. Arcade Spot brings you the best games without downloading and a fun gaming experience on your computers, mobile phones, and tablets. New arcade games and the most popular free online games are added every day to the site.