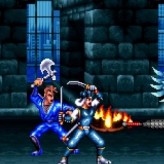 Join the ninja heroes as they start from an amusement park and to the top of the tower defeating bad guys along the way in Ninja Combat! Survive endless attacks from members of the Kage Ichizoku.

Ninja Combat is a classic 1990 side-scrolling beat’em up arcade game developed and released for the Neo Geo arcade system. In this game, there are two playable characters and the protagonists of the story: Joe and Hayabusa. Their main weapon is throwing shurikens but they can also use other weapons to aid them in their quest like nunchakus, maces, and swords. If you find yourself surrounded by enemies, then try to summon a massive fire dragon to lay waste and destroy all enemies on the screen.

Play Ninja Combat game online in your browser free of charge on Arcade Spot. Ninja Combat is a high quality game that works in all major modern web browsers. This online game is part of the Adventure, Arcade, Emulator, and Neo Geo gaming categories. Ninja Combat has 2 likes from 2 user ratings. If you enjoy this game then also play games Pokemon Greninja-Z and LEGO Ninjago The Final Battle. Arcade Spot brings you the best games without downloading and a fun gaming experience on your computers, mobile phones, and tablets. New arcade games and the most popular free online games are added every day to the site.