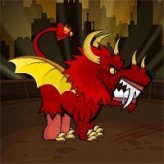 Get ready for some turtle action with Teenage Mutant Ninja Turtles: Dark Horizons. Investigate the trail of Mutagen in the Sewer and defeat the final boss.

Teenage Mutant Ninja Turtles: Dark Horizons is a browser-based action game that was released back in June 2012. As the very first game to be based on the Nickelodeon version of the classic TMNT characters, this game is known for its unique aesthetic by having the characters as neon-lit shadows. Follow our turtle heroes as they try to follow the trail of Mutagen in the sewers and deal with whoever is responsible for the mutant mess.

This game features dozens of enemies you must defeat including a whole variety of mutants, and the final boss Leatherhead. The complete list of enemies you can encounter in this game - in chronological order:

Can you guide the turtles to the final stage and have enough resolve to see things through?
Join the heroes that lurks in the sewers and play today.