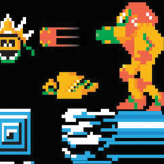 Play one of the most influential classic games of all time! Take control of Samus Aran and battle aliens and space pirates in Metroid!

Metroid is a popular classic action-adventure video game that was initially released back in 1986 for various gaming and arcade consoles including the Nintendo Entertainment System (NES). Metroid is an action 2D platformer video game that takes place on the fictional planet of Zebes. In this game, there are dozens of powerups that help the player in the fight against various enemies. In addition to various enemies, the game also features two bosses named Kraid and Ridley, whom she must defeat in order to progress. Once the two bosses are defeated, the path to the final area will be opened, allowing Samus to fight against the Mother Brain.

There have been 14 likes from 14 votes on this game.

Play Metroid game online in your browser free of charge on Arcade Spot. Metroid is a high quality game that works in all major modern web browsers. This online game is part of the Arcade, Action, Emulator, and NES gaming categories. Metroid has 14 likes from 14 user ratings. If you enjoy this game then also play games Metroid Fusion and Super Metroid. Arcade Spot brings you the best games without downloading and a fun gaming experience on your computers, mobile phones, and tablets. New arcade games and the most popular free online games are added every day to the site.