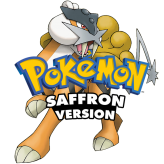 Gotta catch them all! Pokemon Saffron Version introduces you to one of the most popular phenomena in Pokemon - the Great Migration. The Great Migration happens every 10 years. This is where Pokemons spawn consistently in an area for a fair distribution of Pokemons, Trainers, Gym Leaders, Professors, and even Adventurers gather to experience this event.

In Pokemon Saffron Version, you will be in the Azira Region. A beautiful, dense part of South America. Play through 6 gyms, explore and get more content in this beautifully rendered RPG world. Sprites are colorfully drawn to capture your attention. As you move into different parts, you will notice that there are so many things to do! Get a Legendary electric type Pokemon at the beginning of the game. You can choose to have a beautiful Normal Pokemon that evolves into 8 different types depending on your preference. Fight through gyms and assert your dominance as the Top Trainer in the world. Instead of the Professor’s speech at the start of the game, Seasoned Pokemon players will be treated to a bust of a very famous character in the series. Explore Azira island and help Professor Oak to study the migration path of legendary and mythical Pokemon. Gather Data, Uncover the Secrets of the Paths. Foil a recognizable team’s evil plan and be the very best like no one was ever was!