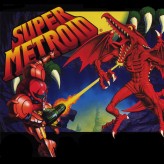 Join the skillful interplanetary bounty hunter Samus Aran as she seeks to rescue an alien larvae from space pirates in Super Metroid! Strap inside the high tech armor and defeat dozens of pirates and other many pirate leaders in this action packed side scrolling platformer game.

Super Metroid is an action adventure and the third game in the Metroid series and the only Metroid game to be released on the Super Nintendo Entertainment System (SNES). Considered to be one of the best games in the franchise, Super Metroid (also known as Metroid 3) introduces a lot of innovative ideas to the series, as well as some iconic cinematic elements, graphics, gameplay, audio, and atmosphere that inspired many of today’s games. Have fun!

Play Super Metroid game online in your browser free of charge on Arcade Spot. Super Metroid is a high quality game that works in all major modern web browsers. This online game is part of the Adventure, Arcade, Emulator, and SNES gaming categories. Super Metroid has 3 likes from 3 user ratings. If you enjoy this game then also play games Super Mario Bros. and Super Mario 64. Arcade Spot brings you the best games without downloading and a fun gaming experience on your computers, mobile phones, and tablets. New arcade games and the most popular free online games are added every day to the site.