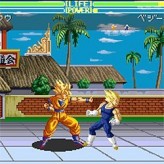 Control Super Saiyan Goku, Gohan, or the rest of the Dragon Ball Z crew and defeat mortal enemies in a one on one battle in Dragon Ball Z – Super Butouden 3! Select your favorite DBZ character and battle it out on some of the anime’s iconic locations!

Dragon Ball Z – Super Butouden 3 is a Japanese retro arcade fighting game that features 9 playable characters including Boo and Android 18. The game features 4 good characters (protagonists) and 4 villains. The game is in Japanese but it is pretty straight forward and easy to understand. The game features a comic style split screen that allows both players to battle beyond the screen. There are also flight mechanic and special moves making this game one of the most played DBZ retro game of its time.