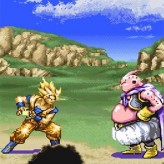 Step into the war of God-like heroes as they battle formidable opponents and alien races. Fight opponents in the air or in land and use your Ki wisely to win in Dragon Ball Z: Hyper Dimension!

Dragon Ball Z: Hyper Dimension features a story akmin to that of the anime. The story takes place from the late Frieza saga and continues until the end of the Buu Saga. However, unlike the anime, in this game, the plot will progress regardless of characters win or not. Dragon Ball Z: Hyper Dimension also features a different approach in telling a story as the game’s story does not focus on the character played. Available hero characters include Goku, Vegeta, Gohan, Gotenks, Piccolo, and Veggito. The Villain characters in the game are: Frieza, Fat Buu, Kid Buu, and Perfect Cell.

Only 1 player mode is available.