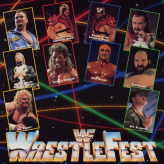 By Ghaadddd, WWF WrestleFest, jump on the of a turnbuckle, grapple, and dropkick! A beat ‘em up simulation of the professional wrestling brand.

WWF WrestleFest adds four players to play the game. For more mayhem. Two modes are added, Royal Rumble and Saturday Night’s main event mode. Royal Rumble lets you fight in the ring with other wrestlers in a time limit, with other fighters entering and adding more to the fight. Saturday Night will let you pick two to form a tag team and make it through a gauntlet of matches that includes a match with the champions, the Legion of Doom. Perform double team moves to inflict more damage. Spend more time on the apron and boost your wrestler’s capability. Win Grapples and inflict more pain than usual. Take control of the popular wrestlers in the era. Run through with Hulk Hogan, bounce of the ropes with the Ultimate Warrior, Connive with the Million Dollar Man Ted Diabase, and Big Boss Man. Jake The Snake, Earthquake, Mr. Perfect, and many more make their appearance in this fun wrestling game. Finish your opponents with style as each wrestler has their signature moves. Certain characters appear as game bosses and are non-selectable. Kick some eight-bit behind in this festival of a game. Know your role and give me a hell, yeah!

Play WWF WrestleFest game online in your browser free of charge on Arcade Spot. WWF WrestleFest is a high quality game that works in all major modern web browsers. This online game is part of the Arcade, Sports, Emulator, and Classic Arcade gaming categories. WWF WrestleFest has 3 likes from 4 user ratings. If you enjoy this game then also play games WWF No Mercy and WWF WrestleMania 2000. Arcade Spot brings you the best games without downloading and a fun gaming experience on your computers, mobile phones, and tablets. New arcade games and the most popular free online games are added every day to the site.