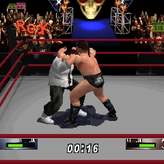 Unleash your punches, kicks, and slams as you aim to claim the World Wrestling Federation’s world champion title in this awesome wrestling simulator for the Nintendo 64 – WWF Wrestlemania 2000!

WWF Wrestlemania 2000 is a wrestling simulator game released for the Nintendo 64 (N64) gaming console in the year 1999. Choose from a selection of over 50 World Wrestling Federation (WWF) wrestlers, which are free to be modified and customized in their moves, skills, fighting style, and appearance according to your own liking as you try to win all of your battles without any struggle in order to be the best fighter there is in WWF. The game introduces a create-a-wrestler mode where you can make your original wrestler compete inside that ring. Good luck and have fun!

There have been 21 likes from 27 votes on this game.

Play WWF WrestleMania 2000 game online in your browser free of charge on Arcade Spot. WWF WrestleMania 2000 is a high quality game that works in all major modern web browsers. This online game is part of the Arcade, Sports, Emulator, and N64 gaming categories. WWF WrestleMania 2000 has 21 likes from 27 user ratings. If you enjoy this game then also play games WWF No Mercy and WWF - Road to Wrestlemania. Arcade Spot brings you the best games without downloading and a fun gaming experience on your computers, mobile phones, and tablets. New arcade games and the most popular free online games are added every day to the site.