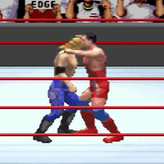 Participate and be a part of the biggest wrestling show of 2002 in this fun action-packed wrestling video game – WWE: Road To Wrestlemania X8! Fight inside the ring with simple controls and master tricky combos and moves to dominate the ring and win glory for your wrestler.

WWE: Road To Wrestlemania X8 is a wrestling video game that was released exclusively for the Game Boy Advance (GBA) handheld gaming system back in 2002. The game is based on WWE’s pay-per-view WrestleMania X8 back in 2002. The game boasts improved gameplay and grappling techniques compared to its predecessors, including WWF Road to WrestleMania. Play four different game modes: Exhibition, Championship Mode, pay-per-view mode and Gauntlet mode. Will you be able to beat other wrestlers in Hardcore action? Good luck and have fun!